My fibre paintings begin with either a reference photo or a free hand drawing with a colour rendering of the final piece.

The basic drawing/design is then transferred to linen backing (which looks very much like burlap but a much finer texture and quality). The linen backing is my “canvas”. The backing with final drawing is placed either in a hoop or solid wooden frame with gripper strips to hold the backing taught during the hooking process.

Strips of fabrics are cut using a cloth slitter or cut by hand. The textiles are combinations of light and dark, dull and bright to achieve the desired visual effects of dimension, shading and highlights. Wool strips range in size from 3/32 to 10/32 of an inch (2 to 8 mm) in width. The widths of the wool strips I use may vary, it can be entirely wide, entirely narrow or a mixture of both. 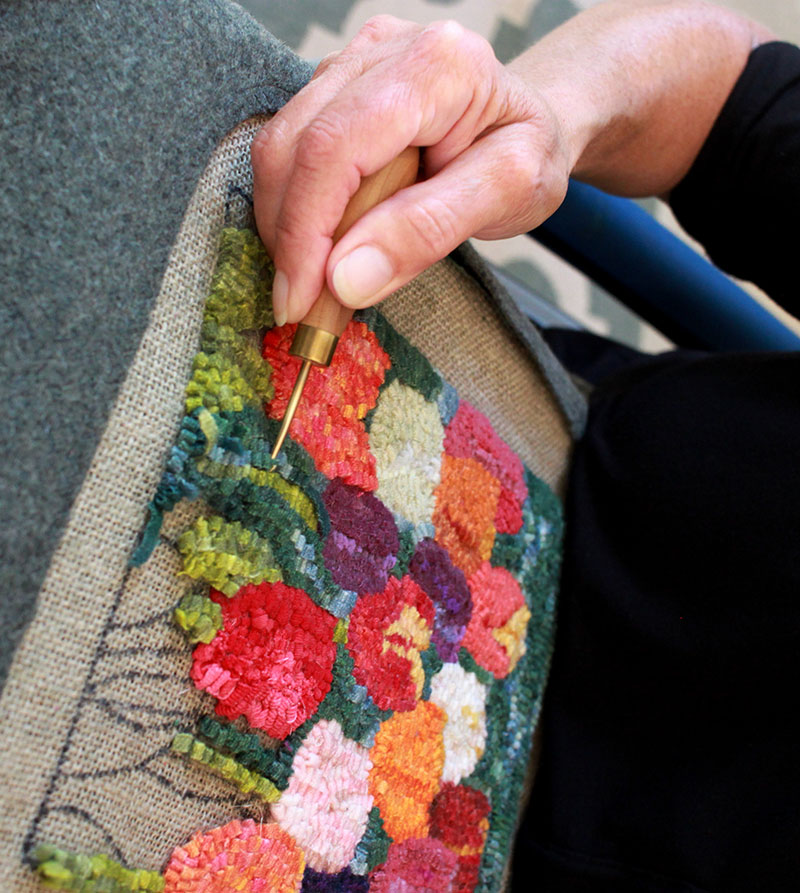 Mounds of coloured strips surround me as I begin to paint with textiles just as mounds of oil paint would be placed on a palette when painting. The work begins by pulling loops of fabric through the linen backing using a crochet-type hook mounted in a handle (usually wood) for leverage.

The process of completing each piece is deeply personal and can take many hours but that time is preciously rhythmic, meditative, tactile and peaceful.

Rug hooking is both an art and a craft where rugs are made by pulling loops of yarn or fabric through a stiff woven base such as burlap, linen, or rug warp. The loops are pulled through the backing material by using a crochet-type hook mounted in a handle (usually wood) for leverage. Wool strips ranging in size from 3/32 to 10/32 of an inch (2 to 8 mm) in width are used to create hooked rugs or wall hangings. These precision strips are usually cut using a mechanical cloth slitter; however, the strips can also be hand-cut or torn. Rug-hooking has been popular in North America for at least the past 200 years.

The earliest forebears of hooked rugs were the floor mats made in Yorkshire, England during the early part of the 19th century. The most recent research indicates that the technique of hooking woolen loops through a base fabric was used by the Vikings, whose families probably brought it to Scotland. To add to this there are sound examples at the Folk Museum in Guernsey, Channel Islands that early rag rugs made in the same manner where produced off the coast of France as well.

Rug hooking as we know it today may have developed in North America, specifically along the Eastern Seaboard in New England in the United States, the Canadian Maritimes, and Newfoundland and Labrador. In its earliest years, rug hooking was a craft of poverty. The vogue for floor coverings in the United States came about after 1830 when factories produced machine-made carpets for the rich. Poor women began looking through their scrap bags for materials to employ in creating their own home-made floor coverings. Women employed whatever materials they had available.

Today rug hooking has achieved the status as a fine art. Designs encompass the present and represent a dynamic combination of materials, methods, concepts and subjects that challenge traditional boundaries